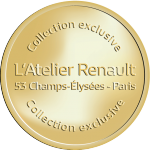 The Renault R.S.17 is a Formula One racing car designed and constructed by the Renault Sport Formula One Team to compete during the 2017 Formula One season. The car is driven by Nico Hülkenberg and Jolyon Palmer. Hülkenberg joined the team after Kevin Magnussen left the team at the end of the 2016 season. It made its competitive début at the 2017 Australian Grand Prix. The Renault R.S.17 was the first car to be fueled by BP and lubricated by Castrol since the Marussia MR02, despite the fact that Cosworth had a technical relationship with BP-Castrol. Carlos Sainz Jr. replaced Palmer as driver from the 2017 United States Grand Prix onwards.