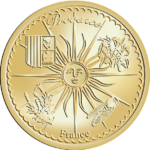 Ancient military port and Roman city, Fréjus rises above the fertile alluvial plains which separate the Esterel mountains from the Maures mountains. At equal distance between Cannes and St Tropez this city of art and culture has built up a rich historical and architectural patrimony. This has been an active and dynamic city since Julius Caesar himself founded it in 49 B.C. and right up to the present with the French Navy often at shore here. The city is filled with monuments, These include one of the largest amphitheaters from Gallic times (1st or 2nd century), a Roman theater, the Porte Dorée (a golden door, ruins from baths of the 3rd c.), the Porte des Gaules, the aqueduct which carried the water from Signole for 40 km and the Cocteau Chapel conceived by Jean Cocteau In 1961 and finished by E. Dermit in 1965.