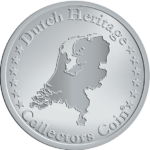 The village of Thorn, with its typical white houses, evolved around an abbey founded at the end of the 10th century. In the late middle ages, the abbey and its surrounding estates became a sovereign state of the German Empire. Thorn changed its status to ‘stift’, a religiously focused but secular establishment. Only women with the most impeccable pedigree were accepted in Thorn, that thus became a haven for the aristocracy’s unmarried daughters. They dwelled in luxury in their white houses, being attended by servants and owning property.