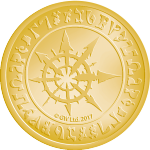 Warhammer 40,000 (informally known as Warhammer 40K, WH40K or simply 40K) is a tabletop miniature wargame produced by Games Workshop, set in a dystopian science fantasy universe. Warhammer 40,000 was created by Rick Priestley in 1987 as the futuristic companion to Warhammer Fantasy Battle, sharing many game mechanics. Expansions for Warhammer 40,000 are released periodically which give rules for urban, planetary siege and large-scale combat. The game is in its eighth edition, which was released on June 17, 2017.
The Chaos Marine – represents ‘The Forces of Chaos’ once an honoured Battle Brother of the Space Marine they fell to Chaos and became enemies during the Horus Heresy