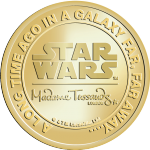 R2-D2 (called ‘R2’ for short) is a robot character in the Star Wars universe created by George Lucas. An astromech droid , R2-D2 is a major character in all Star Wars films. Along with his protocol droid companion C-3PO, he joins or supports Anakin Skywalker, Luke Skywalker, Princess Leia, Padme Amidala, and Obi-Wan Kenobi in various points in the saga. English Actor Kenny Baker has played R2-D2 in all six original Star Wars films and is due to reprise the role in Star Wars: The Force Awakens, the first installment of the upcoming sequel trilogy, making him one of just two characters/actors along with C-3PO (portrayed by Anthony Daniels) to appear in all seven films.