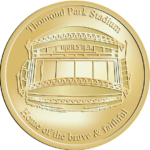 Thomond Park is a stadium located in Limerick in the Irish province of Munster. The stadium is owned by the Irish Rugby Football Union and count Munster Rugby, Shannon RFC and UL Bohemian RFC as tenants. The capacity of the stadium is 26,500 following its large scale redevelopment in 2008. The stadium holds a special place in rugby due to its own unique history and atmosphere. The stadium is famed for its noise during play and the complete silence while home and away players are kicking for goal.