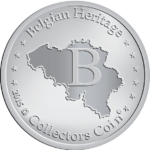 Hao Hao & Xing Hui arrived in Belgium on February 23, 2014. Both pandas have been doing fine in their Quarantine Time and they have started to explore their outside yards at their new home Pairi Daiza since March 12, 2014. The two pandas are 4 years old: the male is called Xing Hui, what means ‘Shining star’ and the female, Hao Hao which means ‘Friendly’. Apparently the name suits her well as she was named ‘favourite Panda in China’ at the Giant Pandas Zoo Award 2013.