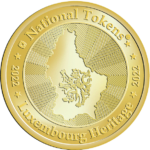 The Golden Lady on Constitution Square was set up in 1923 to commemorate the Luxembourgers who perished in the First World War. It was destroyed by the Nazis in 1940, and re-erected in 1985 by public subscription (having been found hidden under a sports stadium).The memorial represents an elegant female figure standing on a column and holding a laurel wreath. The base of the statue was designed as a tomb for the Unknown Soldier, but was never used. Today it symbolizes freedom and resistance for the Luxembourg people. Coin is available at Sales Lentz.