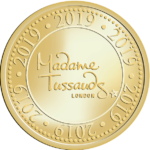 The Imperial State Crown is one of the Crown Jewels of the United Kingdomand symbolises the sovereigntyof the monarch. The crown has existed in several versions since the 15th century. The modern version of the Imperial State Crown is of a design somewhat similar to that of St Edward’s Crown, but shorter and encrusted with jewels: it includes a base of four crosses pattéealternating with four fleurs-de-lis, above which are four half-arches surmounted by a cross.