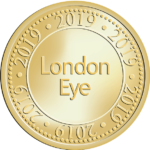 Big Ben and Westminster Palace – Officially called Elizabeth Tower, Big Ben is the nickname for the great bell of the clock at the Palace of Westminster. Completed in 1858, the tower holds the largest four-faced chiming clock in the world and is the third-tallest free-standing clock tower.
Tower Bridge and Tower of London – Built from 1886 till 1894, this symbol of London is a combined bascule and suspension bridge in London, over the River Thames. It is close to the Tower of London, from which it takes its name.
St Paul’s Cathedral – A Church of England cathedral, the seat of the Bishop of London. It sits at the top a hill at the highest point in London. The original church on this site dates back to 604 AD, and it was dedicated to Paul the Apostle. The current church is from the late 17th century, and it received the same name as its predecessor.